A while ago, I’ve subscribed to the newsletter Data Is Plural by Jeremy Singer-Vine. He informs his readers about interesting datasets. One of these datasets is about foreign ministers and their biographies. I’ve found it interesting to briefly look at the aspects gender and military education.

The following graph shows that the foreign affairs of every country are dominated by males. Germany, Netherlands and China had no female foreign minister as of today. Sweden quite known for female leaders and politicans takes the lead with seven female ministers. 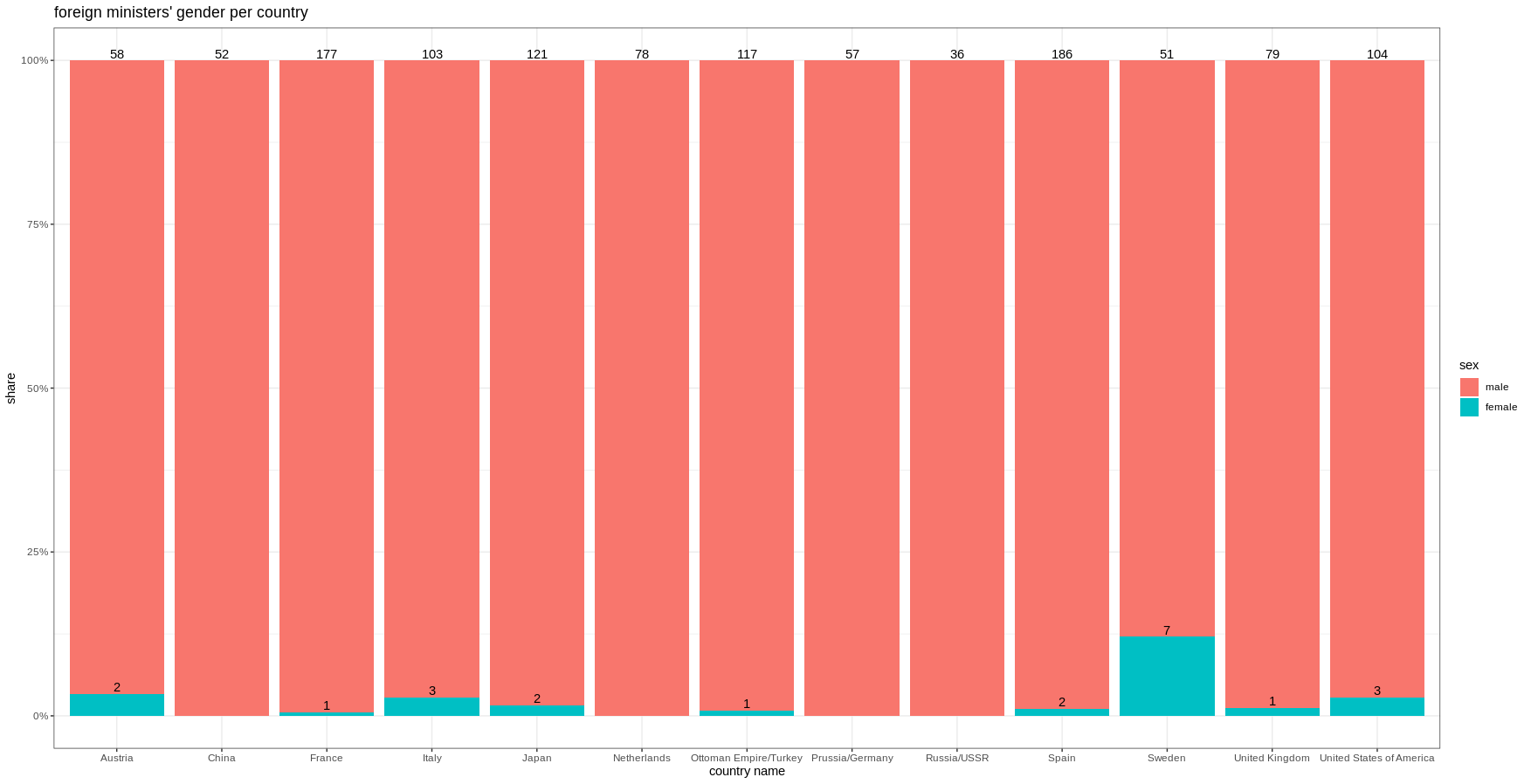 The dataset goes back till 1789, maybe the shares are more equal if I only look at the last 30 years? Well, in the second graph we see that this only true for a few countries. Sweden had more women leading the foreign ministry than men in the past 30 years, but this is not the rule for most countries. 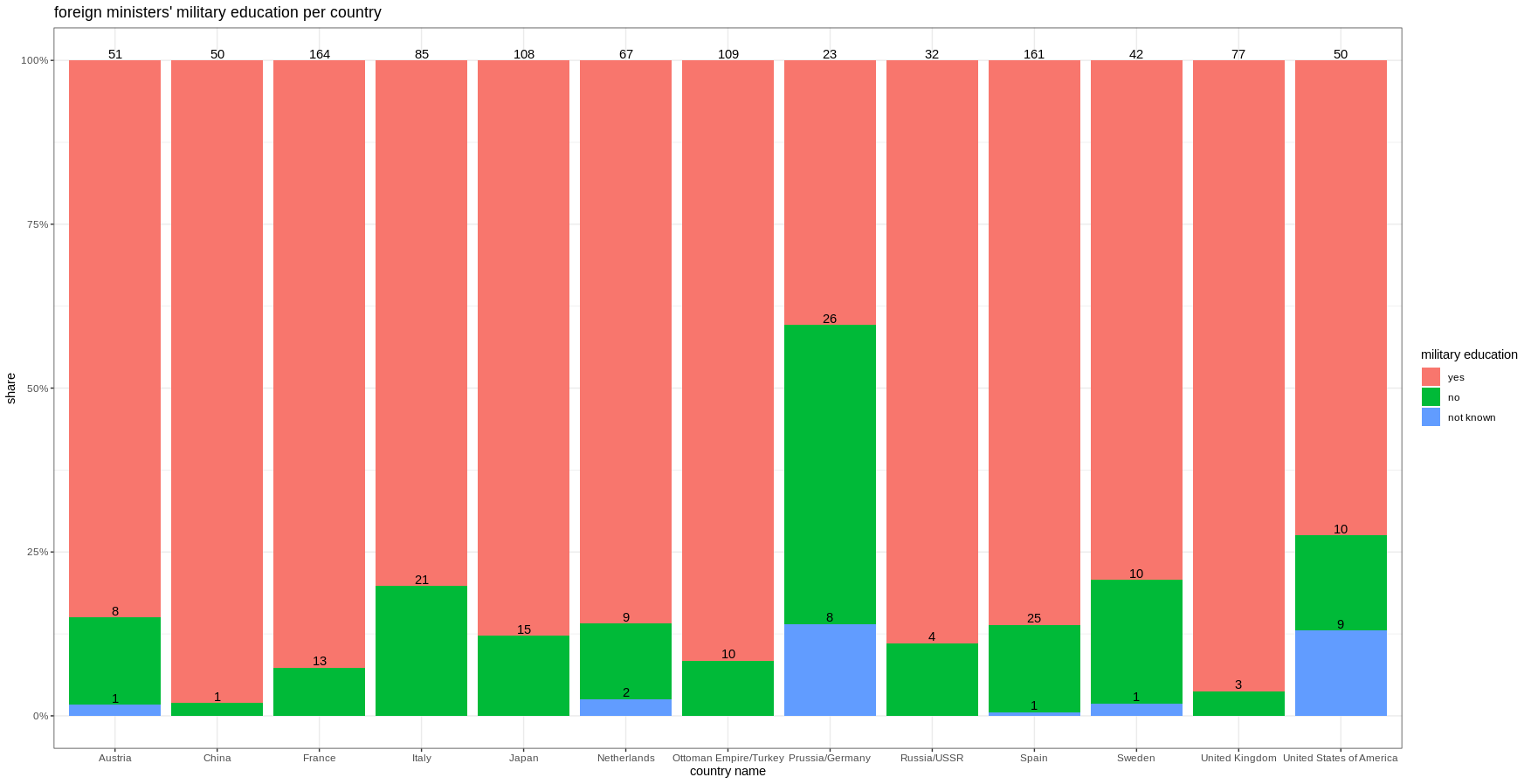 A second time I want to look only at the most recent data from 1990 onwards. I had expected that the shares between Germany and the other countries would come closer, but the opposite is the case. If no research has been conducted on this aspect yet, someone should do it. 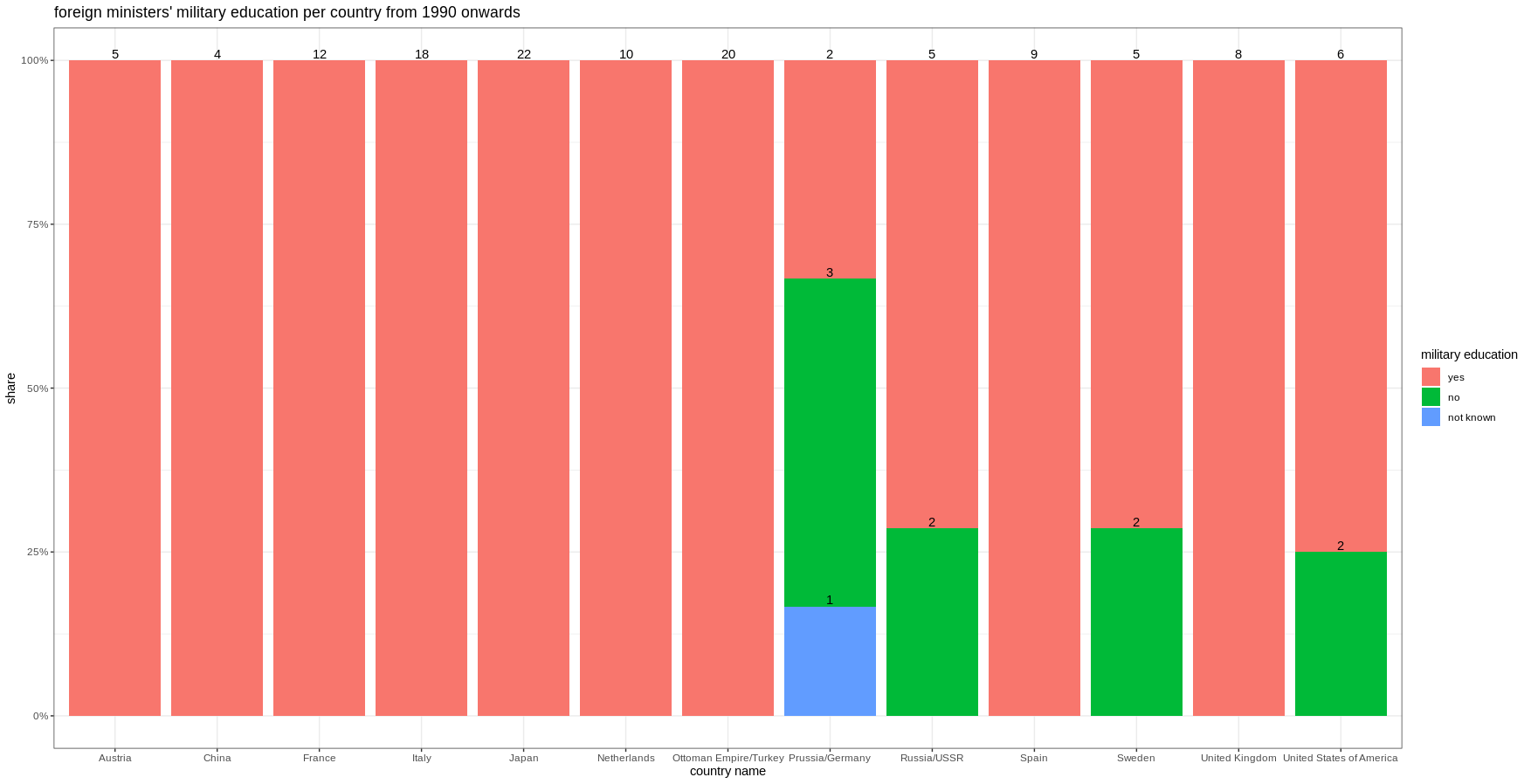 In my master thesis I analyzed the parliament speeches given in the German State parliaments between 2008 and 2018. The time period covered varies between the states. My python code that converts the speeches into a machine-readable format is publicly available. I’ve have created a dataverse where you can download the scraped speeches and interjections.

With this year’s presidential election in France I have stumbled on an interesting feature of the french electoral system, to vote by granting someone else power of attorney. This way of voting was introduced in 1975 and to vote by mail was abolished at the same time. At first, it is striking to me that this electoral possibility lifts the secret of your vote. By a matter of fact I knew through a friend how someone else is going to vote in the first round as that person was her trustee. I thought secret voting is a requirement in all countries, but it seems that not every electoral framework obligatory demands this.

My interest of this aspect of the electoral procedure led me to look more into this. As it turned out, the French can still vote by mail, but only in the legislative elections, not in the presidential elections. They have switched to this possibility for people who cannot participate themselves in an election due to large number of frauds and other irregularities. After the option to vote by mail was abolished, the french lawmakers have gradually reintroduced this option recently, in particular for Frenchs living abroad. Arthur Charpentier, Baptiste Coulmond and Joël Gombin show a correlation between the use of vote by an agent correlates with socioeconomic characteristics of the voter.

In the 2012 presidential elections 1,5 millions of Frenchs used this option to vote. These votes accounted only for 5,4 % of the votes in the second round, but in a close race they can make the difference of whom becomes the next president. Charpenteir, Coulmond and Gombin also point to surprisingly high rates of vote by an agent on the island Corsica. The possibility of fraud had been less an issue with this way of voting, but the increasing number of voters who use this option is changing this. Surely, today more than ever people everywhere, not only in France, move around a lot which makes them indisposed to personally go to a ballot. Whatever new options for the act of voting in absence we might be able to come up with, the security of the act should not be jeopardized.

In my first semester at the Toulouse School of Economics I took the course “Statistical Software for Data Scientists”. The professor gave us the assignment to apply the techniques for data collection, data cleansing and data visuzaliation on some data. I came up with the idea to create a basic guide for new people in Toulouse. The guide offers people the oppportunity to look for cinemas, parks and other places of their interest. The guide is also online available.

The city of Toulouse runs a platform for open data where several data sets are available free to use. The data sets that have places as their observations also include the coordinates of these places. Some of them provide the data for this guide. I’ve mainly used the R packages shiny, leaflet and ggmap. Shiny is a great tool and I’m sure that I will have use in the future again. It takes some time to understand how I make my own functions responsive, but the invest of some time was definetely worth it.

The guide features the possibility that users enter their address and see how far (air line) they are away from each listed location. The guide is still quite rudimentary. Possible extensions would be that users can click the markers on the map and details such as the address and opening hours would be presented. With some more work this guide could actually be used by new arrivals to have a list of locations at hand which they can explore. Unfortunately, I don’t think that I will have this time.